Istudied art in college, focusing on painting. One day I went to the library to find source material for a project and came across a Catholic history book. Inside it was a brief story of the life of Saint Therese, also known as the Little Flower. I recalled that, as a little girl, I admired a statue of a petite nun who stood outside my family’s first parish in Springfield, Illinois. I don’t remember much about Sunday services at Little Flower Church, but something about that statue stayed with me. 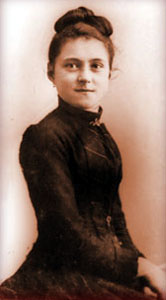 Therese Martin was born in 1873 in Alençon, France, the youngest daughter of devoutly Catholic parents. When Therese was only four years old, her mother died, and the family moved to Lisieux, where she was raised by her older sisters.

As a child, Therese was precocious and doted on by her family, but she also inherited their spiritual piety. Once, she claimed to experience a mystical vision in which a small statue of the Virgin Mary smiled at her.

All four of Therese’s sisters opted out of marriage when they came of age. Instead, they chose the religious life, with three of them joining the local Carmelite convent. When their baby sister turned 15, she hoped to go to Carmel as well, but her youthfulness was an issue. So, she pinned up her hair to try to make herself look older, then went to see the bishop. Although her efforts failed to win him over, she later had the chance to meet the pope and seek his blessing. The following year, the bishop relented, and Therese entered Carmel with her sisters.

As a very young novice, Therese dreamed of traveling to far-off lands to work as a missionary. But, it soon became apparent she would never fulfill this dream. Not long into her life as a nun, Therese contracted tuberculosis.

For most of her years at Carmel, Therese was somewhat of a liability. Her illness prevented her from helping the other nuns with the chores and projects that kept the convent running. Some days, she mustered enough strength to walk outside and sit in the cloistered garden, where she laid flowers at the base of a crucifix. But, other times, she was bedridden, with nothing to do but ruminate on her poor health and wonder about her purpose. She wrote down her thoughts.

Therese pondered her own helplessness and examined the lofty roles reserved for Church leaders and the saints she admired. One of her favorite saints was Teresa of Avila, a Carmelite who lived centuries before her and accomplished great works while traveling across Spain. Unlike her heroine, Therese needed to find a more limited way of making her life matter. Sitting among the plants in the convent garden, she realized something: if all living things are part of God’s creation, then all of them must have value. She used flowers to describe people: 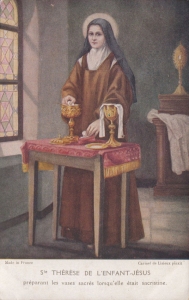 “[God] set the book of nature before me and I saw that all the flowers he has created are lovely. The splendor of the rose and whiteness of the lily do not rob the little violet of its scent nor the daisy of its simple charm. I realized that if every tiny flower wanted to be a rose, spring would lose its loveliness and there would be no wild flowers to make the meadows gay.”

Therese also developed her own methods of praying, which were influenced by Teresa of Avila’s ideas concerning “mental prayer.” The liturgy of the Mass and other formal Church prayers were a regular part of Therese’s religious life, but she much preferred to communicate with the Divine through her own words and thoughts, or simply by “being” in the presence of God.

Therese wrote about these mature spiritual ideas when she was a young woman. Her illness meant that little time lay ahead of her, and her sisters recognized this fact. They encouraged her to write as much as she could, and one sister, who had access to a camera, took photographs of her.

Tuberculosis ravaged Therese’s health and brought about her premature death in 1897, when she was 24. Remarkably, in her short time as a Carmelite, she produced a great body of writing, from large treatises, like her famous autobiography, Story of a Soul, to smaller works, including a play about Saint Joan of Arc.

My Song for Therese

During college, after discovering Therese in a library book, I couldn’t stop thinking about her. I was drawn to the girl who became a nun at such a young age. In my art studio, I went to work on a series of small cartoon-like pieces that combined the feminist and Catholic ideals of my youth. My artistic skills were not well-developed, but I made a tiny painting of the saint.

Decades later, I took a job in publishing. Therese showed up again, this time in a children’s catechism textbook. For the first time, I saw actual photos of the saint — the ones taken by her sister. I also read some of Therese’s writings and came to understand her through her own words. I felt connected to her approachable smile, practical spirituality, and acceptance of human frailty.

One day I was feeling frail myself. So, I sat with a guitar in my backyard garden and wrote the song Prayer to Saint Therese of Lisieux. ∗

PHOTO AT TOP OF PAGE: Therese of Lisieux in 1889, age 16 (© www.theresedelisieux.com). Visit the gallery for more photos and other images of Therese.