Song: Desire
(The Ecstasy of Saint Teresa of Avila)

In 2013, I joined a pilgrimage group that traveled to Spain and Rome. Our main purpose was to explore the places where Saint Ignatius of Loyola lived and worked in the 16th Century. But I found myself drawn to another Spanish saint of that time, Teresa of Avila. 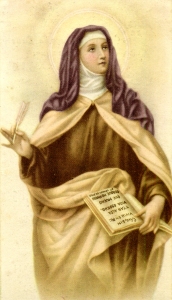 Teresa Sanchez de Cepeda y Ahumada was born in 1515 at Gotarrendura, Avila, northwest of Madrid. She was raised in a wealthy family, and at age 20, entered the local Incarnation Carmelite Monastery. Many rich families sent daughters to the Incarnation, and their money followed. This “dowry” system supported the convent, and it also ensured the women’s continued enjoyment of material comforts.

The large institution of 150 sisters was difficult to supervise. Ignoring traditional Carmelite rules, the women led robust social lives, hosting frequent visitors, including men. Teresa disapproved of the frivolous environment she found herself in. Frustrated, she began thinking of ways to reform the Carmelites. But, deeming it impossible to change the Incarnation’s structure, she set out to establish a separate community governed by piety, poverty, and contemplative prayer.

The idea of a second convent was unpopular among Avila’s local residents and people of power. Teresa, however, was a natural leader with keen business and political skills. She secured high-ranking Church allies and support from Spanish royalty, and set up Avila’s San Jose Carmelite community in 1562.

Over the next 20 years, Teresa continued her reform movement. She gathered other backers and traveled throughout Spain, founding 15 more convents and providing charters for male monasteries. At every turn, she faced economic setbacks, physical hardships, and resistance from authorities. But she persisted.

While publicly managing her growing reform network, Teresa also turned her attentions inward. The main point of establishing the new communities was to ensure the spiritual growth of the residents. Teresa meditated as a form of prayer. And she believed such contemplation led her to mystical visions. She said her physical body united with God through love.

Teresa wrote down her ecstasies and the step-by-step methods for achieving them. Notable manuscripts are her autobiography and The Way of Perfection (both penned before 1567) and The Interior Castle (1577). In the latter, she wrote about the need to care for the human spirit: 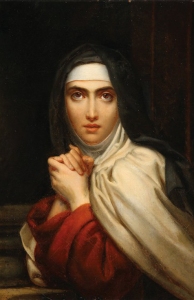 “As to what good qualities there may be in our souls, or who dwells within them, or how precious they are — those are things which we seldom consider and so we trouble little about carefully preserving the soul’s beauty. All our interest is centered in the rough setting of the diamond and in the outer wall of the castle — that is to say in these bodies of ours.”

Throughout her life, Teresa suffered bouts of debilitating illness. In 1582, while traveling, sickness overcame her for the last time. She died at age 67.

In the 16th Century, Europeans believed women were intellectually inferior to men. Also, in general, men forbade women to venture outside their hometowns. But Teresa was confident in her mission and overcame the limitations of her gender. She freely traveled across Spain and proved she had a great mind, one that could win political negotiations, oversee a multi-city organization, and develop new philosophical and spiritual ideas.

Teresa’s reform movement took root and became a model for Carmelites throughout the world. Her writings were widely distributed, and her concepts of mental prayer have influenced spiritual thinkers for many centuries.

My Song about Teresa

While traveling with my pilgrimage group in 2013, I was excited to visit Avila, the medieval walled town where Teresa launched her Carmelite reforms. As our group criss-crossed Spain, we saw images of Teresa everywhere. When we moved on to Rome, we were able to view a famous statue of Teresa in ecstasy by Gian Lorenzo Bernini (see gallery page). The sculpture is a sensual interpretation of Teresa’s visions, based on her own accounts.

What would it be like to encounter the Divine as Teresa did? I imagined it would produce a range of emotions, both pleasing and frightening. After returning home from the pilgrimage, with Bernini’s sculpture in mind, I wrote the song Desire (The Ecstasy of Saint Teresa of Avila). ∗

PHOTO AT TOP OF PAGE: Statue of Teresa in Montserrat, Spain. Visit the gallery for more photos of Teresa.